Regardless of your theory on what happened on September 11th, 2001, everyone can agree that that particular Tuesday irrevocably changed America. As the ten year anniversary of that fateful day approaches there will be many memorial services, remembrance events and reflections on the lives that were lost at the World Trade Center, in Shanksville, Pennsylvania and at the Pentagon. As these commemorative events take place across the nation, there will be one symbol of strength, unity and national pride that will be present at every ceremony – the flag of the United States of America.

While the United States’s flag has long stood for independence, in the years since September 11th it has come to mean much more. Many will fly their flags with pride on just one day out of the year as a symbol of respect for those who died. However in addition to the United States flag, remembrance and memorial flags for the citizens, who perished, and the fire fighters, police officers and EMT’s who perished are also available for display.

And while flying a flag will not change the past, or bring back the innocent victims of the attacks, it does stand as a sign that we remember their passing with honor, with hope and with courage. Unity and strength have gotten this country through the last ten years, and while the United States flag still flies proudly over this land unity and strength will continue to support our nation through the next ten years. 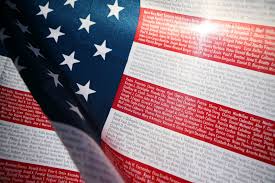 Flag of Honor containing the names of all 2996 victims of the September 11th, 2001 attacks. Photo credit Rhonda Churchill.

American Flag photo at the beginning credit to The Moral Liberal.